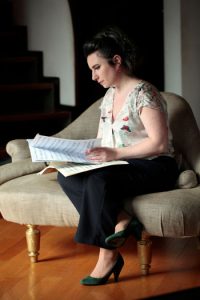 Italian pianist Alba Gentili-Tedeschi is based in Berlin since 2006. After graduating with first class honors at Milan’s Conservatory with Silvia Rumi, she moved to Germany where she graduated in 2011 from the Universität der Künste Berlin under the tutelage of Linde Grossmann. In the same year she finished her studies at the Accademia Pianistica „Incontri col Maestro“ di Imola, studying with Piero Rattalino. In Milan she also studied composition with Irlando Danieli.

Concerts have taken her throughout all of Europe in major concert-halls like the Lingotto in Turin, the Auditorium Verdi in Milan, the Tonhalle in Zürich, the Volksbühne und Staatsoper in Berlin and the Concertgebouw in Amsterdam.
As a soloist she played with the orchestras „Guido d’Arezzo“, Orchestra stabile di Alessandria, the Orchestra sinfonica del conservatorio di Milano and the „LaVerdi“ Orchestra of Milan.

Since 2012 she is a stable member of  Duo Kermani-Gentili and Trio Transmitter – the last one focusing mainly on experimental music. In 2015 Trio Transmitter was supported by the Initiative Neue Musik Berlin. Their first cd “camera obscura” was released in September 2016 by NEOS Music.
Pianist of the Opera Lab Ensemble since 2014, she played in Salvatore Sciarrino’s „Macbeth“ conducted by David Coleman at the Staatsoper Berlin. She collaborated then regularly with the Staatsoper – 2018 sees her as a Pianist/Performer in “Abstract pieces” by Manos Tsangaris.

The Berlin’s contemporary music scene allowed her to expand her horizons from contemporary to experimental music. Being very convinced about the collaboration between the arts, she has been working with actors, videos and installations, exploring the huge amount of possibilities that her instrument has to offer. Her repertoire can count diverse world premiereres and first performances in Italy, Germany and the Netherlands. She took part in many international festivals, such as the Münchener Musiktheaterbiennale, Umlaut Festival Berlin, FirenzeSuonaContemporanea, INFEKTION! Festival and Kontraklang Berlin.